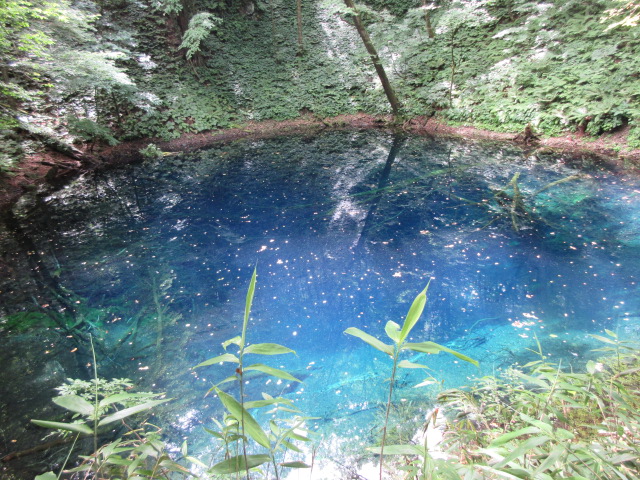 Have you ever seen blue pond? There is blue pond called “Aoike Pond” which is one of the Juniko Lakes at the foot of the Shirakami-Sanchi registered as a World Heritage Site in Aomori Prefecture, Japan. This time, I went to see Aoike Pond in search of mysterious blue beauty.

Shirakami-Sanchi is a vast mountainous area located in the prefecture border between Aomori Prefecture and Akita Prefecture in Japan. The unprecedented world’s largest wild beech forest is distributed and it is registered as a World Heritage Site in 1993 because there are many precious plants and animals.

Juniko Lakes is a generic term for lakes in a corner of the Shirakami-Sanchi. “juni” means twelve and “ko” means lakes in Japanese. In fact, there are 33 lakes in the vast beech forest, but somehow the number “12” is used and the exact reason is unknown. According to one theory, it is said that it was originated that only 12 big lakes among 33 lakes could be seen when seeing from the rocky place called “O-kuzure”. The most famous lake among Juniko Lakes is “Aoike Pond”.

The timetable of the bus is posted on the homepage of Konan bus. The following timetable quotes the information at the time of posting this article, so please be sure to check the latest information when actually using it for sightseeing.

As a supplementary information, I will briefly explain about Resort Shirakami. 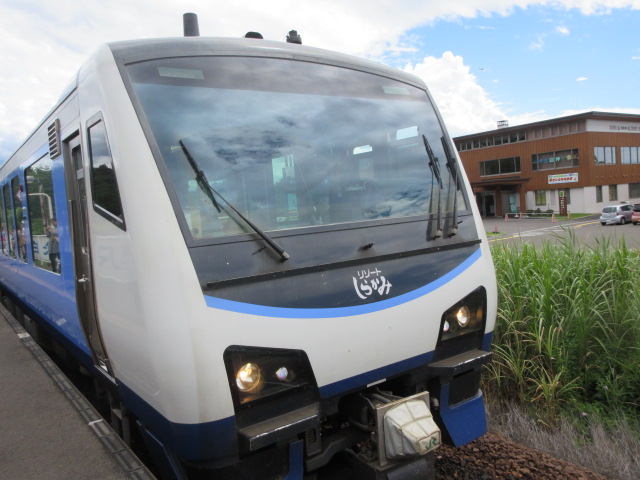 Resort Shirakami is a tourist train that runs between Aomori and Akita prefectures. It is a popular train that has won the nation’s top ranking in the local line rankings. 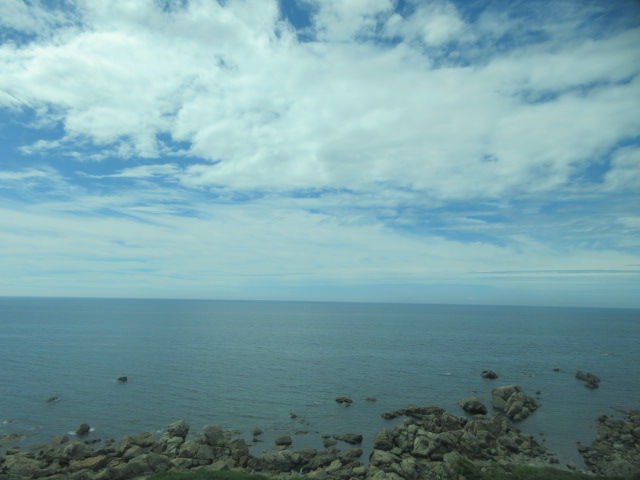 Because the train runs along the Sea of ​​Japan, it is the most attractive to see the magnificent ocean and the rocks of the beach and other spectacular scenery. As you get closer to the scenic point, the announcement will flow in the train and the speed of train will be slow, so photography is easy.

Walking tour of the Juniko Lakes 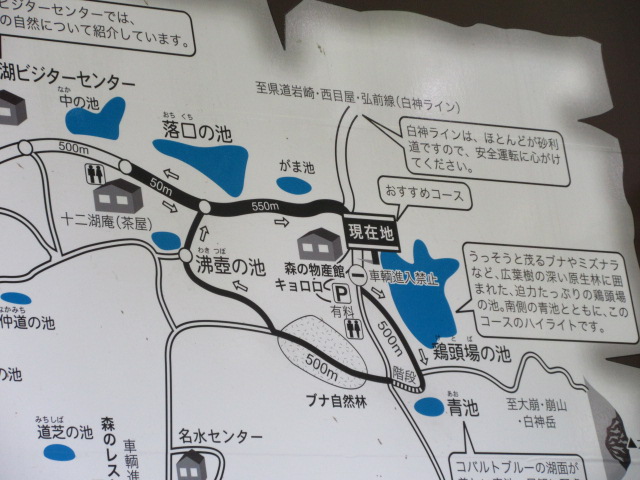 There are many routes to explore the area around Juniko Lakes, and the way of walking changes depending on the place you want to go. Among them, the recommended model course which passes through the most popular Aoike Pond among the Juniko Lakes and can turn around the whole in about an hour is the route of the above picture. Starting from the Mori-no-bussankan Kyororo, we go around the Ketobanoike Pond, Aoike Pond, Beech natural forest, Wakitsubonoike Pond, Ochikuchinoike Pond, Junikoan, and eventually again we will be back in Mori-no-bussankan Kyororo. In this course, you can take a walk from late April to late November, and you can enjoy autumn leaves from the beginning of October to the end of November.

I will introduce the beautiful scenery of the Juniko Lakes with a picture when I traveled to there. 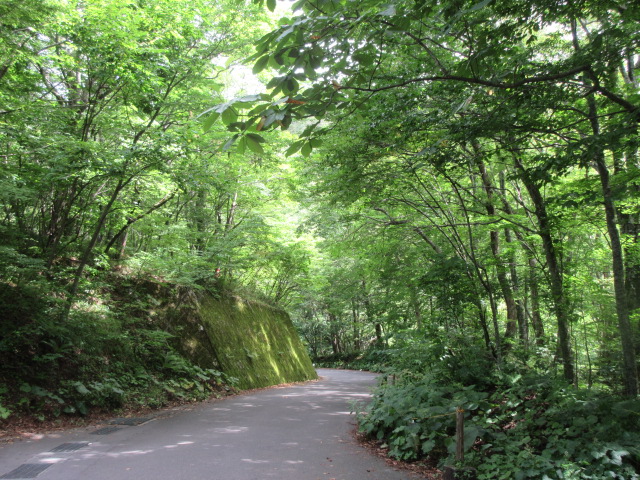 Start from the Mori-no-bussankan Kyororo and walk along the mountain path like the photo above. 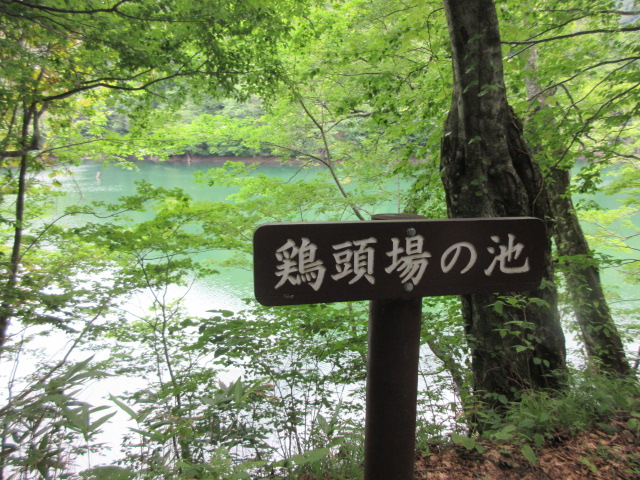 When walking a bit, you can see “Ketobanoike Pond”, one of the Juniko Lakes, on your left. 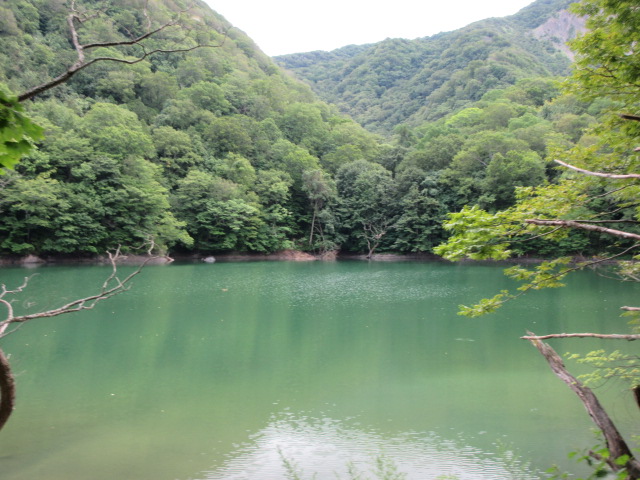 The water in the Ketobanoike Pond is green. Beech grows abundantly in the background, and fall foliage becomes very beautiful in autumn. 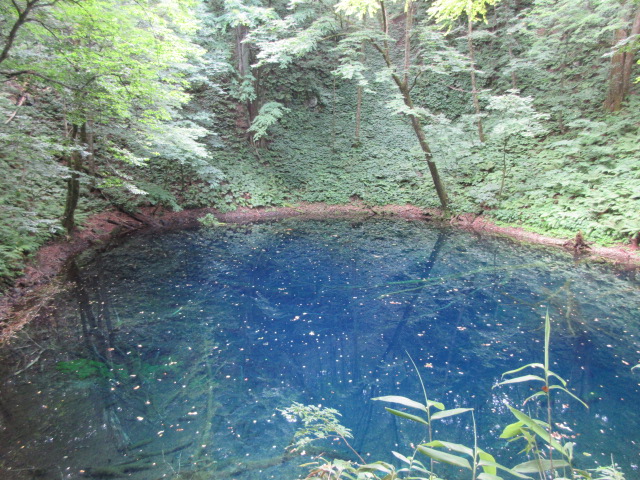 When you walk a little from the Ketobanoike Pond, you will arrive at Aoike Pond. The color of Aoike Pond is often expressed as “cobalt blue” which is a color meaning vivid blue. Not only photographs, but actually it looks like a blue color even if you see the raw Aoike Pond. There is a mysterious atmosphere indeed and it is very beautiful. 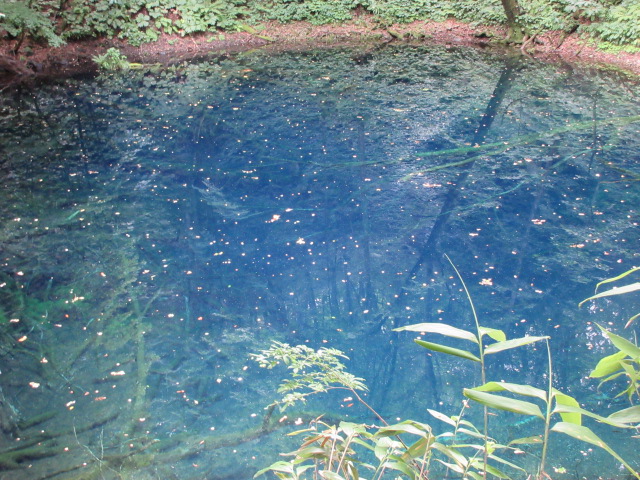 Looking into the water surface, you can see that the water is clear. I can not feel muddiness and dirty, and the underwater plants are clearly reflected. 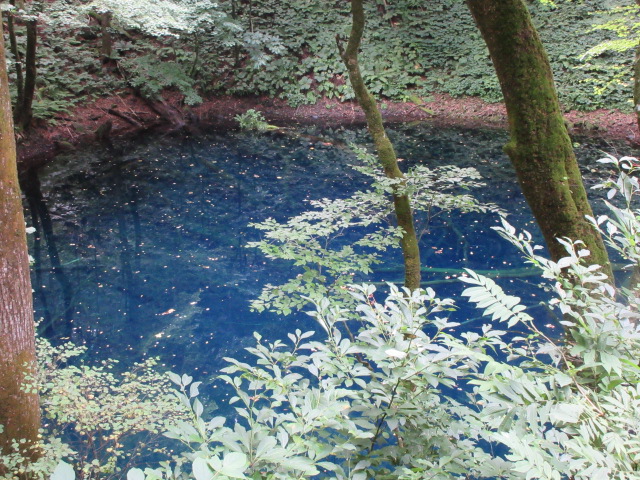 Observation of Aoike Pond will be done from the wood deck in the middle of the walk course. Since it is located a little higher than Aoi pond, you will observe Aoike Pond in a looking down manner. Because the color varies slightly depending on how much sunlight is hit, you may be able to see different secenary when you move the position to observe. Actually, the above picture was taken from a higher position than the wood deck, and I feel that the color is slightly darker. 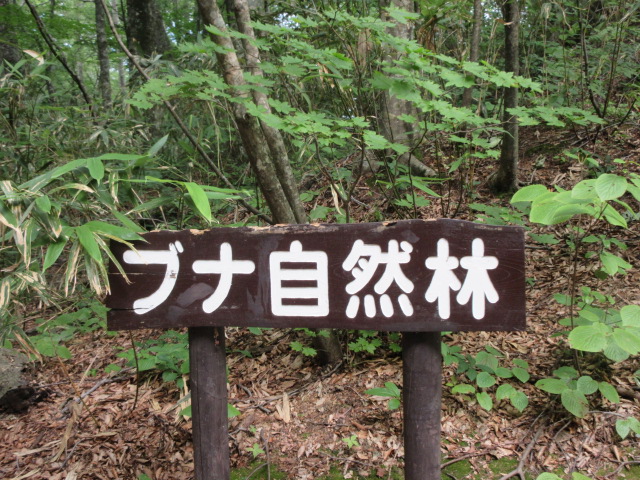 After Aoike Pond, the natural forest of beech will continue for a while. 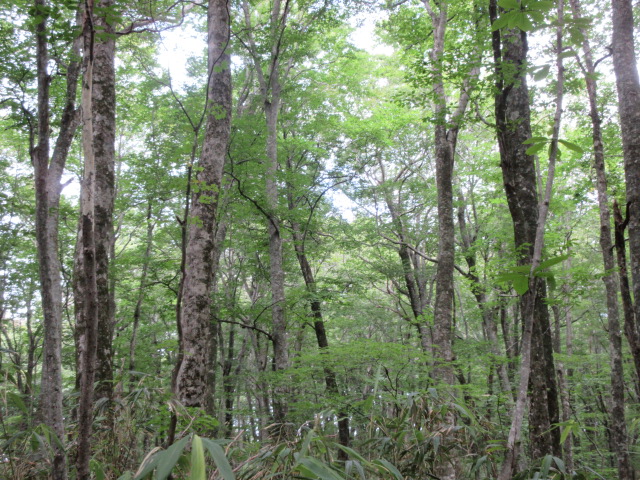 As shown in the photograph, beech grows thick as far as you can see. Although sidewalks are improved for walk, there is a possibility that stones and branches are falling, so let’s go with the dress that is easy to walk on. 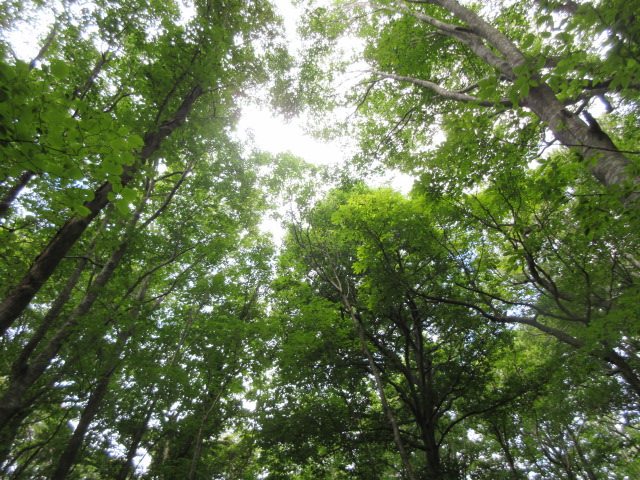 You may be tired of walking especially in the summer, but if you sometimes look up at the sky, it is beautiful with light on. 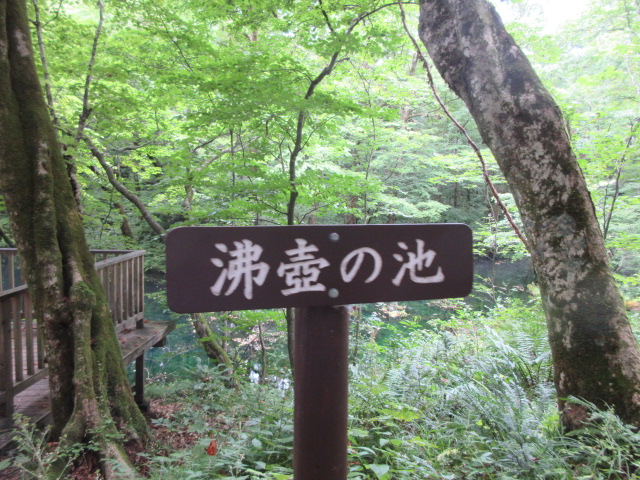 After you pass through the beech forest that lasts about 500 meters, you will arrive at “Wakitsubonoike Pond”. 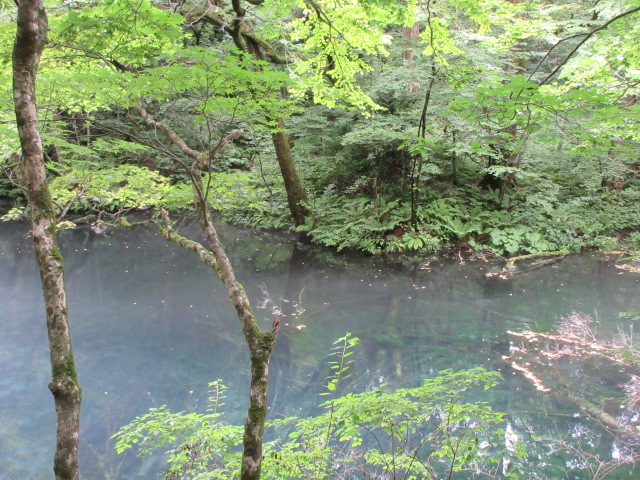 Like Aoike Pond, we observe from the wood deck. It is said that Wakitsubonoike Pond are in the color of emerald green, but I was not sure when I went and there was no impression as much as Aoike Pond. Still, the water in the pond is crystal clear and very beautiful. 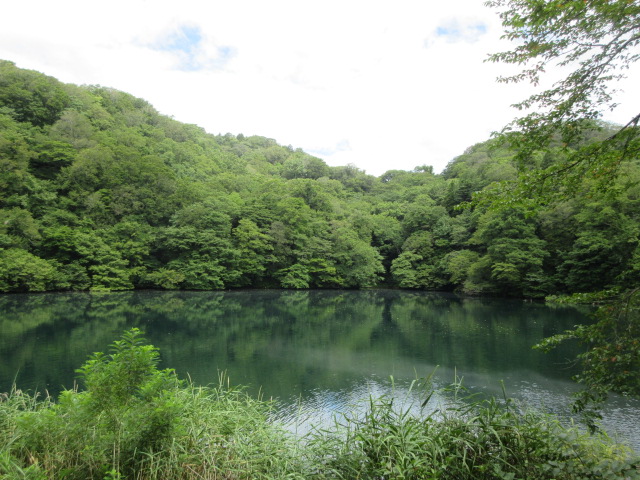 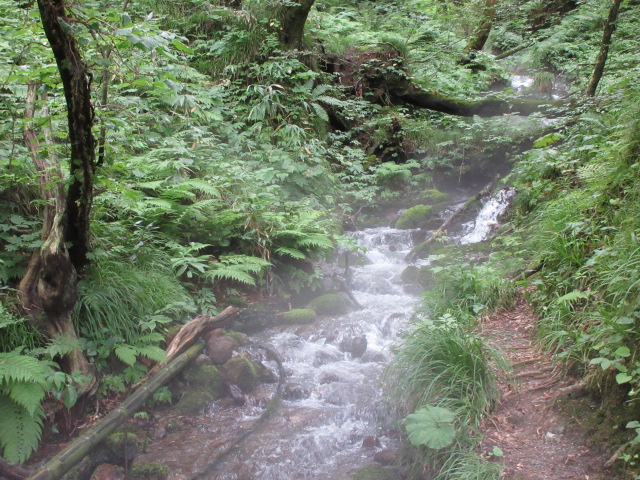 And next to the Junikoan, there is spring water flowing from the Wakitsubonoike Pond. This spring water is selected as “100 famous water selection of Heisei”, and you can drink spring water that flows through bamboo and accumulate in hands and plastic bottles. The temperature was cold and it was a very delicious spring water.

After the Junikoan, I will walk back to Mori-no-bussankan Kyororo, walking for about 15 minutes. A lot of souvenirs are sold there. I drank juice of special carrots and apple juice of Aomori specialty. There is a light snack corner besides the shop, you can eat udon noodles, soba, curry and soft cream. Also, there is no toilet on the way of the walking tour of the Juniko Lakes, so let’s go to the restroom here before departure.

As I expected in advance, I was deeply moved by the magnificent view of Aoike Pond. Moreover, I was able to feel the power of nature by walking on the beech forest that is registered in World Heritage Site. Transportation access is a bit inconvenient if there is no private car, but fulfillment is high, as you can see various large and small ponds of blue and green in the time required for about an hour.